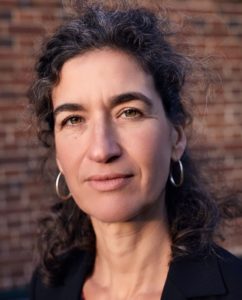 Daniëlle Hirsch studied Economics at the UvA, specializing in environmental, development, regional, and international economics. During her undergraduate studies, she lived for a year in Mexico City. She says that her year there taught her that much of what she had learned about economics was far from true. Daniëlle did her thesis on environmental economics in Kenya. What started as a study on the value of mangroves quickly turned into a study on policy as she learned that the mangroves were being cut by a couple of white men who had all the freedom in the world to do anything they wanted to. She then worked in Paraguay, Delft, and is currently a water specialist and director at Both ENDS.

You are the director of Both ENDS, a Dutch NGO that works with civil society organizations in the Global South to help bring their voices and concerns to the attention of policymakers and the corporate world on local, national, and international levels. What exactly are these concerns at the moment?

In your experience, what are the main obstacles standing in the way of these voices being heard?

DH: One of the main obstacles is that people have unlearned to speak to each other. When Dutch companies go to Brazil, Honduras, or Malaysia, they unlearn to communicate. They know that there are people living in the areas they want to invest in, but they refuse or are scared to talk to them. Perhaps they think that the government of the recipient country is not okay with them, or that it is the government’s responsibility to do that. This is not entirely the fault of the companies, however. Part of the problem is that embassies no longer facilitate that dialogue either. In other words, I think that the biggest obstacle we see is that people are becoming disconnected from each other, while they are in fact connected because one is interfering in the life of the other.

What is, in your view, the single greatest challenge facing International Development at the moment?

DH: The biggest challenge is that people who define themselves as being interested in international development have absorbed the neoliberal discourse so much that they don’t question anymore whether they are doing the right thing. The other obstacle that I see is more particular to the Netherlands. The Dutch think two things: one, we are too small to make a difference; and two, we are doing everything as best as we can. Both are not true. We are a huge economy, a huge tax haven, we have the biggest port of Europe etc. And the truth is that we are not doing everything to the best of our efforts. We are actually taking part in the race to the bottom. This second obstacle is quite tricky because before you can address it, you first have to make people see that there actually exists a problem in the first place.

You have mentioned before the role that ‘countervailing power’ can play in creating fair and sustainable societies. You have defined this power as that ‘area in our society that contains everyone and everything that is not part of the established institutions of government and business’. Considering this quote, I would like to know your opinion on the role, if any, that the private sector should have in development.

What are, in your opinion, the most powerful examples of ‘countervailing power’ today?

DH: What is very interesting at the moment is what is happening with the tax justice discussion. It seems like it started yesterday, but this whole movement has been building up for 20 years. The Panama and Paradise Papers – these are part of countervailing power, right? It is, in fact, a very interesting example of countervailing power because it consists of a combination of civil society actors, journalists, and the media. Hopefully, it will make change happen even though it may take another ten years.

Do you really think it could happen?

DH: It will. Today we talk about neoliberalism all the time, but forty years ago nobody talked about it. All it took was a very small group of people such as Milton Friedman, Greenspan, etc. They decided to do something different and built their power upon that. We can do the same. We can sit together, five women, and say ‘okay, let’s do things differently’. I’m sure it’s already happening. Countervailing power is usually thought of as ‘we are against something’, but it can also be interpreted in a positive sense. Many of the NGOs we work with show that things can be done in a totally different way. For instance, there are currently groups that are re-greening the Sahel, which is usually portrayed as a desert area. Farmers figured out how you can make that area green and let the forest grow again. They have re-greened five million hectares which is about the size of France. This is also a form of countervailing power. Not just saying no to ugly things but also yes to beautiful things.

Do you think divestment campaigns are feasible options for transforming companies’ practices?

DH: Yes. I think that divestment, particularly in the case of climate change, can be very effective because companies, pension funds, and people have put money into fossil fuel companies thinking that they are ‘a sure investment’. And they are not – for many reasons. Divestment in this case is not only a campaign, but it’s also based on logic. It is healthy economic logic to simply say ‘okay, putting money in fossil fuels is no longer a safe economic investment; let’s stop these companies from functioning’.

You have previously studied disciplines as different as history and economics. You now work in the field of International Development. Is there anything that you believe needs to be critically re-examined about the way in which we study development?

DH: Yes. I think that development is not only about countries that need to develop but also about the type of development that we are promoting as, for instance, The Netherlands. How can we understand why Colombia is not respecting human rights? Well, it is not respecting human rights because there are pushes from Western companies, supported by their governments, to not do this. Why don’t we discuss how we can make sure that these companies don’t push for human rights abuses? I think that the way we study development is very one-sided. If you want to change things, you can talk to Colombia as much as you want, but they are limited in what they can do. We greatly underestimate the power that we have over other countries. We don’t understand what our economy does and how it works. You have to start looking behind the scenes and ask questions about how we manage our policies and why we make certain choices. Why are we still a tax haven? What kind of consequences does this have? Why does Heineken not pay any tax in Egypt? In other words, I think that we are studying the wrong side of the moon.

What do you think is needed for people in developed countries to start thinking about these things, or for policy makers to start making changes? Do you think that there is a lack of political will or is it something else?

DH: This is what I don’t know. And I’m trying to figure that out. What I’m trying to do is have conversations with as many people as possible about this. I must say that most people look at me and go ‘oh, I never looked at it this way’. Development has been a buzzword for thirty, forty, fifty years now, and while everybody knows that it’s not working, few people take a different look at the problem. Luckily, there is an amazing amount of people that are actually very grateful when you start having some of these alternative conversations.

What would you like to ask the following expert in the field of IDS who will be interviewed in the next newsletter?

DH: What will be, according to you, the next issue after the tax haven debate that will have a global shock wave effect?